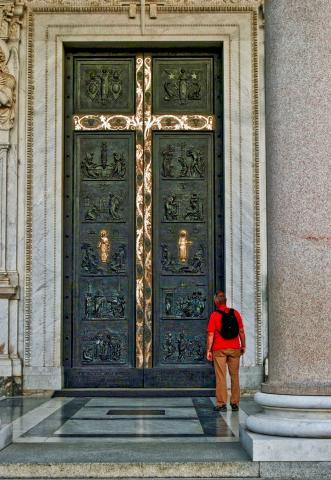 London England’s church, St. Martin’s in the Field, at one time had the following statements of belief on their website (not inclusive here): -

We believe in and proclaim both the mystery that is God, only partly know and partly do not know, and the human need to worship.

We believe in and proclaim the person of Jesus Christ Who distinctively reveals the nature of God and the meaning and purpose of life, and who calls us to follow him through the death of the cross to the place of resurrection.

We acknowledge of the destructive power of human sinfulness, and we welcome gratefully the forgiveness that God offers to those who are prepared to turn to the truth.

We are committed to taking all people seriously wherever they might be there particular point of understanding, while at the same time sharing with them whatever insights may have been gained by our relationship with God.

Now, it seems to me that last affirmation describes what Christians are all about. With our Lord’s help, we are seeking to live as best as we can - "in the mess in the middle."

This is the time of Lent. The people of God are on a 40-day journey on this Sunday in the journey of Lent. It is a somber time to be sure but even in Lent we remember that each Sunday is a little Easter, and in the midst of darkness and despair, still there is hope of a better day, a new day – a day of triumph.

From the lectionary, we read: ‘In the midst of Lent… our faces are pressed hard against the reality of our sin and our death. If we did not know how the story ends, this would be a dark and depressing journey. But we do know how the story ends and therefore in the midst of austerity and fasting we remember our faithful Savior and the Easter declaration that life is always victorious over death – always!’ So we take courage, our hearts grow strong, and once again we are determined to throw our lives into the struggle on the side of peace justice and love.

Could it be that we are only in the middle? – that life as we know it is not yet all that it’s meant to be? Not the way things are supposed to be? That this is not all He wrote for us and for the cosmos? That history actually is going somewhere? That somehow our living in this mean-while can be filled with hope? That we may find reassurance, new perspective, fresh vision and new strength, despite perhaps sometimes the feeling that death’s tentacles grasp are ankles and grip our heart.

There is a certain kind of reality of which the Bible speaks. ‘The trouble with life,’ says Woody Allen, ‘is that it is so every day.’ Life can be so brutal, merely banal or just boring. We do live in the middle, in the in-between time of ‘what is’ and ‘what will yet be.’ Trouble permeates our every day. Even when set free from slavery, God’s  ‘prone-to-wander’ people were caught living between two worlds: no longer in Egypt but not yet in Canaan. They were to spend a great amount of time wandering in the desert. And so do we all.

A Psalm speaks of trouble, of adversaries on the paths ahead that will have to be faced. And yet, the author writes: ‘The Lord is the stronghold of my life, of whom shall I be afraid?” Enemies will challenge and threatened his life. ‘Evil ones advance against me to devour my flesh.’ An army besieges him; war breaks out. He is under attack. That day, very much like circumstances of our own, is a day of trouble, now upon him – upon us.  No wonder we feel we’re in a muddle, most days, in the midst of some mess or another, in the middle – in this mean time.

Perhaps there is even trouble in the Christian community. There often is. Professed followers of Jesus, his apprentice-disciples seem sometimes unable to get along with one other.  They are unable, they think, to worship or to work together. St. Paul wrote (in his letter to the church at Philippi in his day) of the danger that believers too may have ‘double minds’ and [rebellious hearts.’ And giants there be: enemies of the cross – opposed to gospel teaching and gospel living, despising good news, wrapped up in their own small stories and resisting God’s grand designs. Their minds, he says, are mostly fixed still, on earthly things. Their major god is their appetite. With shame as their final goal destruction, their destiny, is sure.

Our Lord was met with opposition to his message in his own ministry (see for instance Luke 13: 31 to 35). The King (Herod Agrippa) wanted to kill him. But Jesus, wiser by God than that “old fox” continued a ministry of healing and deliverance, pressing on to complete victory, even though it meant (and was accomplished) through a Cross. Even professing believers who saw themselves as God’s People, rejected the message and its presenter, outright, not at all ready to exclaim, “Blessed is He who comes in the name of the Lord.” But Jesus longed still to gather them – as He would gather us to safety, comfort and provision, like a hen nestling wee chicks under her wings. If only they – if only we, were willing.

Dr. R. Maurice Boyd who before his death was pastor of the City Church in New York, told of a man who said of the Burlioz Requiem, with it’s basic text, ‘mournful is the day of judgment,’ that it was “haunted by the absence of God.” Boyd remarked that in itself was a haunting quote. “I’m sure you’ve noticed,” said Boyd, “that when you are separated from someone you love, their absence is filled with their presence. The Irish have a word for it. They call it ‘aisling’ which means, ‘the longing for an absence.’” So it is with God, continued Dr. Boyd. ‘The experience of the absence of God is still experience of God, for we cannot miss what we do not know and we cannot long for what we do not love. Christians and Jews know this for both faiths have the book of Job and have learned that a cry of the dereliction may declare that God is often most present when he appears to be most absent.”

So, in the midst of Lent, in the middle and muddle of life, somehow the faith-full cling to God, or perhaps, rather, are clutched by God to Himself.  “For even (quoting Boyd again) “in the silence may come delightful rumors of another land, in the night can be glimpses of glory, visions of the Bright Country and of ‘a land that is fairer than day.”

The Bible’s many books (for it is a library) speak not only of suffering and evil, of broken people and failed dreams, of opposition and trial, but also – time and again, of God’s surprising interventions, born purely of His grace. Genesis (as do most of the books in this wonderful library) speaks of transition(s): from bondage into freedom. God’s People are time and again set free to become resident, in as sense as aliens. We can be at home with, and in, God. Though living still in this broken world, we have all of the promises of God for the future when all is once more right-side-up, and with precisely all those provisions He supplies for our needs, not always our wants, in the now.  We are not alone in the mess and muddle of the middle.

Again Buechner – “’Exodus’ means there is a way out. There is deliverance, to use that beautiful old word, and Christians are people who have been delivered just enough to know that there’s more where that came from, and whose experience of the little deliverance that has already happened inside themselves and whose faith in the deliverance still to happen is what sees them through the night. Jesus is our Moses, and the mighty hand the drives back the waters of the sea. He is our Exodus. He is himself the Golden door to home before which we all of us stand in our homelessness.”

In her book, ‘The Time Between,” Wendy M. Wright gives encouragement and hope: Never let anyone tell you the desert is barren. It is teeming with life. And Joe creatures lurk under stones, tenacious plants clean to life in the thin topsoil, minute wildflowers, nearly invisible unless viewed at close range, dot the desert floor. All of it is cradled in the vast embrace of silence, so deep it calms all thought and feeling. The deep silence enters us and teaches us to listen, to see, to hear – to become attentive to the silence of God. There in the vast stillness of solitude, we are gradually converted – unmade and remade. We become a fresh beginning. In the middle, in the desert, in the wilderness of life, there can come at tipping point when we move from despair to hope and from doubt to the beginnings of faith.

So we to turn once more to him who is our master for, after all, aren’t we trying to see with his eyes and feel with his heart and to move with his compassion and with His love and mercy?

John Ruskin wrote a letter to his father telling him that he had become a Christian. “I resolved that I would believe in Christ and take him for my master in whatever I did. That two disbelieve was as difficult as to believe; that there are mysteries either way but the best mystery was that which gave me Christ for a Master. When I had done this I felt peace within me which I had never known before.”

We do live indeed in a fallen world. It is broken – and we are broken in and by it, in so many ways. But we are full of hope, we Christ-followers – even in the desert. For here too we may look around and see and hear and discover a surprising, surpassing Presence, perhaps not always revealed in some burning bush, but at least in some green shoot or tiny flower. Like tiny flowers, fragile but resilient, we survive, even thrive in the deserts of life. In places of danger and rugged beauty too, in all of life’s extremes of too much or too little, we receive the gifts of God and are sustained. We are heartened, protected, guided by a Word. And, sometimes, known or not, we receive a Hand, the ministering touch of angels.

We are not alone. We are tended by God. And we are so loved.

The Season of Lent